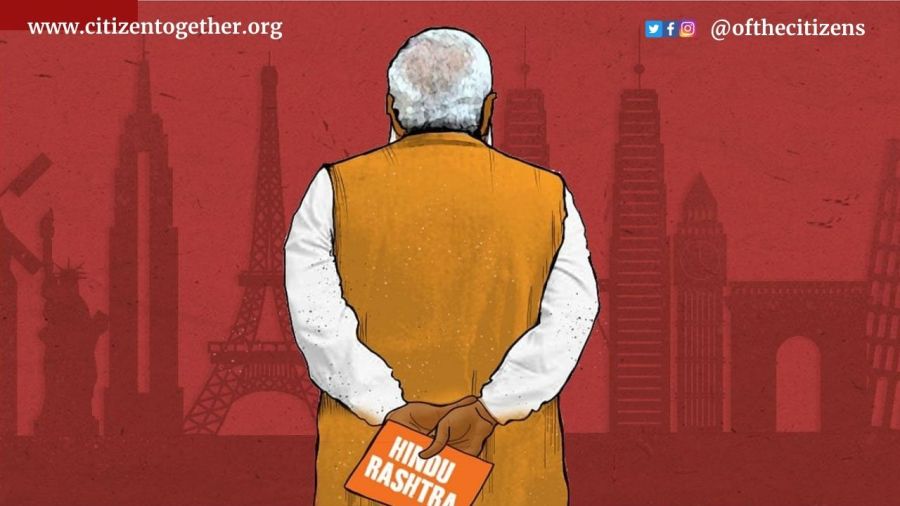 A republic nation is defined as “a state in which the supreme power rests in the body of citizens entitled to vote and is exercised by representatives chosen directly or indirectly by them.” India marks January 26 as its Republic Day every year. In 2022, the country is celebrating its 73rd Republic Day.

On this day in 1950, the Constitution of India came into effect, replacing the Government of India Act as the governing document of India and thus, turning the nation into a newly formed republic.

However, after seven decades India gradually is on the verge of becoming an ethnocracy. Under the Narendra Modi led BJP government the country is normalizing the notion of Hindu Rashtra; indirect majoritarian governance.

Prime Minister Narendra Modi led BJP government has pushed the world’s largest democracy towards an authoritarian state. Under this regime, a concept like secular and liberal has become politically and socially insignificant and reduced abuses.

On the other hand, the BJP governing in an authoritarian manner have suppressed dissenting voices with brutal state force, locked up young political activists and incarcerated them for practising their fundamental rights.

The BJP regime has systematically destroyed the governing systems that are meant to ensure checks and balances on unrestrained executive power. Under the Modi government, the stringent draconian laws have turned into weapons of mass harassment.

In the recent past, a climate of fear has been introduced in the country. Students, Activists, Religious preachers, Farmers, Academicians and even Doctors had to face the wrath of the state for standing up for constitutional rights.

The judiciary, media and the bureaucracy are facing the impact as well.

Hindutva groups, stalwart to a jarring and exclusive Hindutva (a radicalized political ideology targeting every other dominion) nationalism, have been energized and strengthened by the regime in their efforts to socially propagate communal hatred.

From December 17 to 19, 2021, several Hindu religious leaders had given incendiary addresses targeting the minority community at the closed-door conclave ‘DharamSansad’ in Haridwar district of Uttarakhand. A dharma Sansad, religious parliament, is a platform of Hindu religious leaders or saints, where decisions are taken on issues considered important to the dharma.

And in such an event, several hate speeches were made against Muslims. A Priests, who addressed the gathering, called upon the Hindu majority community to take up arms against Muslims as they gave a clarion call for a ‘Hindu nation’. Yati Narsinghanand, a Hindutva leader who alleged to have an army of trained violent disciples reportedly said that “arming the Hindu brigade with bigger and better weapons” would be the “solution” against the “threat of Muslims.”

Unfortunately, the radicalized ideology of communal bigotry and violent nationalism has possessed the country. As the journalist, Rana Ayyub puts it during the Covid-19 Pandemic, “What is left for a virus to kill in a morally corrupt nation.”

The government’s policies, which thrive on communal division, are tarnishing the country’s social fabric. Ever since Narendra Modi assumed PMO office, in 2014, his BJP government has systematically pushed through legislation that actively discriminates against Muslims. In almost every election campaign, senior BJP leadership including PM Modi has used anti-Muslim slogans, framing Muslim communities as “anti-national,” or fifth-columnists, using explicit, egalitarian blare to win elections.

However, it is not surprising that, in the last six years, India has witnessed an unprecedented increase in hate crimes against religious minorities, particularly Muslims and Christians. Hindutva extremists have lynched Muslims repeatedly on the pretext of “Anti National” or poisonous hate.

Despite such heinous crimes most of the perpetrators have been allowed to walk free on bails. A recent example, In Karnataka, two Muslim youth were lynched by Hindutva goons after the hate speeches delivered by RSS leader allegedly inside a local Police Station premises. One of the victims Shamsher (21) suffers severe injuries while the other Sameer Shahpur (19) lost his life merely because of his religious identity.

The citizenship act CAA violates the fundamental principles of the Indian Constitution, designed to discriminate against Muslims was introduced by the majoritarian regime in 2019. Wide protests erupted against the unconstitutional CAA across the country, the protesters were brutally thrashed and many dissenters succumbed to their injuries which they suffer during the protests.

Hindutva fanatics who supported the citizenship bill openly incited violence. They were roaming India’s streets shouting “Shoot the traitors”. In fact, on several occasions, violence broke out in many parts of the country.

The violence claimed many innocent lives including an IB Police officer in the nation’s Capital. Businesses of many Muslims were seized in many parts of the country to recoup the costs of damage to public property, as an act of revenge on protesters. The FIR (First Information Report) registered were mostly against the Muslims.

Recently, PM Modi was seen offended with the way Indians have been living, stated in his recent speech “The talk of rights, to some extent, for some time, maybe right in a particular circumstance, but forgetting one’s duties completely has played a huge role in keeping India weak”. What should be assumed by the statement of a Prime Minister who insists all of his country people stop “wasting time” fighting for their rights, and focus instead on their duties?

However, at the same time Muslim girl’s students In Udupi’s Government PU College, have been denied entry into classrooms and made to sit outside because they chose to wear headscarves (Hijab), and no statements came from any of the prime minister’s speeches.

Article 25 of the Constitution which guarantees freedom of religion to all persons in India continues to disappear but the prime-minister talks about duties.

While the politicos talk about any important decisions regarding the overall development of the country, unnecessary factors like castes, creed and religion intervene with propaganda to distract the denizens of the country.

The system has become so fragile that it looks like a nightmare to bring India back on track. Under the current regime, the people who stand for liberty and secularism are under constant attack.

After seven decades the Democratic, Secular and Republic sovereignty of India has become a knotty riddle.

This site uses Akismet to reduce spam. Learn how your comment data is processed.