11th March declared poll result for five different states but it’s only UP verdict which stole the show and became hot cake for television as well as for social media sites. And the reasons are obvious. The one-sided victory of BJP was unpredicted especially after the course of demonetization. 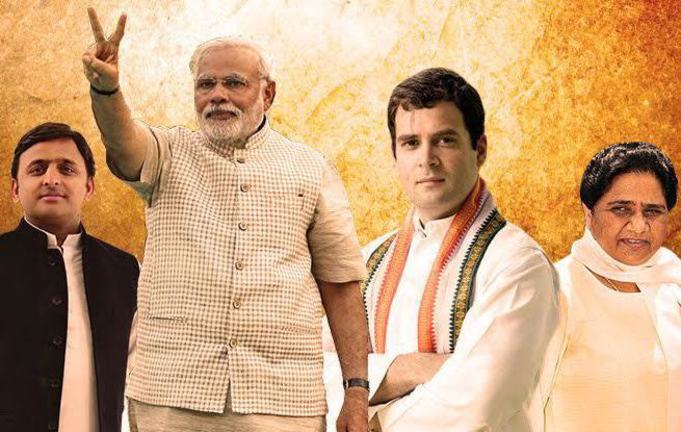 Here are seven bullets points from the UP poll results:

1. Why not begin with the remark of the claimed ‘Vikas Purush’? Prime Minister throughout his campaign, since Lok Sabha election campaign, never preferred to use any communal remark but he broke his fast in Fatehpur. It was not Ram Mandir but the demand for Shamshan in each village put against ‘Kabristan’ which was really amusing. And we can say that Ramzan Vs Diwali worked well.

2. For the first time since independence, BJP surpassed 300 seats in UP assembly and marked a history. It would be like doing wrong with the voters if we do not acknowledge their sentiments for their tallest leader. If we believe statistics published by NDTV, voters across castes and classes went for Modi. Even Jat, Dalit, and Yadav preferred Modi over their traditional leaders. And finally one can conclude that Hindutva is the new love of Uttar Pradesh.

3. Akhilesh Yadav accepted his defeat and didn’t pass the blame over Congress Party. Usually, blames are a matter to shift responsibility in politics. Yes, the same way that Mayawati did. Akhilesh was confident of his development agenda, ignoring his failures in controlling law and order and communal riots which slowly plotted ground for the saffron party. Anyways, despite the arguments with his father, former CM decided to continue his friendship with RG.

4. It will be truly unjustified if we do not bring in Muslims while talking about UP. The state holds largest religious minority than any other Indian state, and the representation of the community is one obvious debate. Just like 2014 poll results, Muslim representation drastically fell in the state. In order to maintain its communal figure, BJP didn’t field any Muslim candidate on any of 403 seats and batted extremely well.

5. Instead of discussing alleged EVM scam, it is better to bring the topic of debutants. This election, many sons tried to claim the legacy of their father. Few of them are here, let’s see what happened to them:

From the son of gangster turned politician Mukhtar Ansari to front row leader of BJP Rajnath Singh’s son, sons of a number of well-known political leaders contested in this election to unlock their fortune. Abdullah Azam, son of Azam Khan of SP contested from Swar Tanda constituency and managed to get victory, but the national level shooter and son of Mukhtar Ansari, Abbas Ansari tasted defeat in his opening. Meanwhile, debutant Pankaj Singh, son of country’s Home Minister, marked massive victory and won by a margin of more than 1 lakh. There are a few more but prominent ones are above.

6. Interestingly women representation in UP assembly raised slightly. Out of 403 MLA,41 are the women with their 10 percent of stake in representation. In 2012 Assembly election, only 36 out of 79 women made their way to state legislative hall. But this time winning strike rate is 67 percent. Perhaps one reason to cheer on International Women’s Day.

7. BJP is successful in pushing all regional parties towards extinction. Ajit Singh-led Rashtriya Lokdal party which once had a strong influence on Jat-Muslim vote bank in western UP is now reduced to one seat in the assembly.  Almost same with Dalit patron Mayawati, who however did not significantly lose vote percentage but the seat. Two continuous failure within 3 years brought the national level party to its knee.

Firstly appear at The Companion